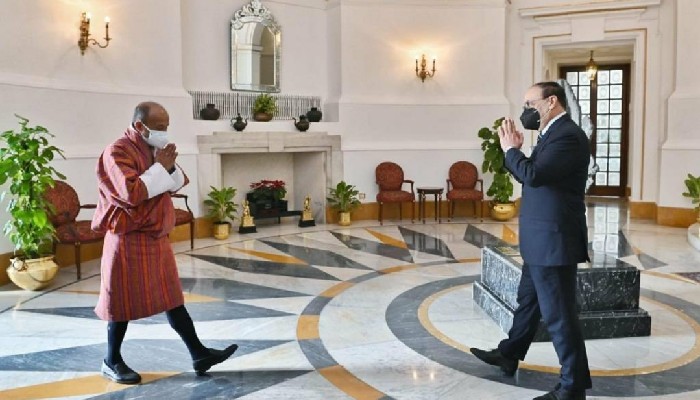 Foreign Secretary Harsh Vardhan Shringla on Monday called on Bhutan’s Minister for Economic Affairs Lyonpo Loknath Sharma who is on a visit to India.

According to a tweet by the Ministry of External Affairs, they discussed economic cooperation with a special focus on the hydropower sector.

“Foreign Secretary @harshvshringla called on HE Lyonpo Loknath Sharma @BhutanMoea Minister for Economic Affairs of Bhutan during the Minister’s visit to India. Discussions covered economic cooperation, with special focus on the hydropower sector,” said the tweet.

Lyonpo Sharma is on an official visit from January 6-20 during which he is set to meet Indian Commerce and Industry Minister Piyush Goyal and Power Minister RK Singh and discuss trade, commerce, and hydropower issues and challenges.

The Bhutanese Minister will attend the 10th Vibrant Gujarat Global Summit that will be held from January 10 to 12 this year as a representative from the government.

The special relationship has been sustained by a tradition of regular high level visits and dialogues between the two countries.

According to the website of the Indian Embassy in Thimpu, the government of India is committed to support the socio-economic development of Bhutan.

Hydro-power cooperation between the two countries is an example of win-win cooperation, it says.

The Indian Embassy website noted that hydropower projects provide a reliable source of inexpensive and clean electricity to India, generating export revenue for Bhutan and cementing our economic integration.

So far, the Government of India has constructed three Hydroelectric Projects (HEPs) in Bhutan totalling 1416 MW (336 MW Chukha HEP, 60 MW Kurichhu HEP and 1020 MW Tala HEP), which are operational and exporting surplus power to India at a rate of Rs 2.12 per KwH (for Tala HEP and Kurichhu HEP) and Rs 2.25 per KwH (for Chukhha HEP).

About three-fourth of the power generated is exported and the rest is used for domestic consumption. Hydropower exports provide more than 40% of Bhutan’s domestic revenues, and constitute 25% of its GDP.