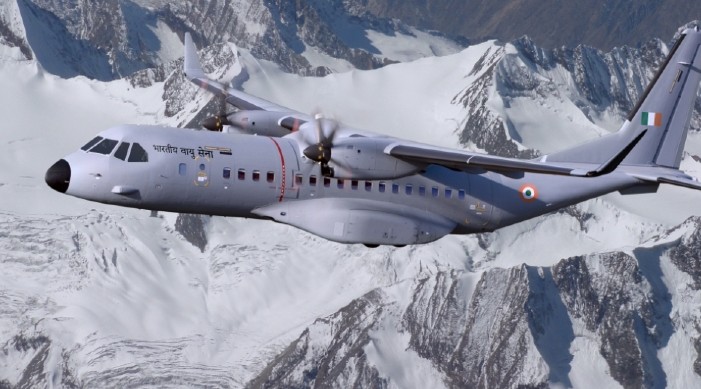 In a big step towards modernisation of the Indian Air Force (IAF) transport fleet, the Ministry of Defence has signed a contract with M/s Airbus Defence and Space, Spain for acquisition of 56 C-295MW aircraft.

While 16 of these aircraft will be delivered in a flyaway condition from Spain within 48 months, the remaining 40 will be manufactured in India by the TATA Consortium within 10 years of signing of the contract.

These will replace the ageing Avro transport aircraft of IAF.

This is the first project of its kind in which a military aircraft will be manufactured in India by a private company, the Ministry of Defence said after the contract was signed on Friday.

The C-295MW is a transport aircraft of 5-10 tonne capacity with contemporary technology.

All 56 aircraft will be installed with indigenous Electronic Warfare Suite.

After completion of the delivery of all the aircraft, the subsequent aircraft manufactured in India can be exported to countries which are cleared by the Government of India.

"The project will give a boost to aerospace ecosystem in India wherein several MSMEs spread over the country will be involved in manufacturing of parts of the aircraft. The program will also involve development of specialised infrastructure in the form of hangars, buildings, aprons and taxiway," the defence ministry said.

The aircraft is capable of operating from semi-prepared strips and has a rear ramp door for quick reaction and para dropping of troops & cargo.

Their induction will be a significant step towards modernisation of the transport fleet of the Indian Air Force (IAF).

The aircraft will give a major boost to tactical airlift capability of IAF, especially in the Northern and North-Eastern sector and Andaman & Nicobar Islands.

The Cabinet Committee on Security (CCS) had cleared the procurement of these aircraft in September 8.

After the CCS gave its approval, the defence ministry had said that a large number of detail parts, sub-assemblies and major component assemblies of aero structure are scheduled to be manufactured in India.

The programme is expected to generate 600 highly skilled jobs directly, over 3000 indirect jobs and an additional 3000 medium skill employment opportunities with more than 42.5 lakh man hours of work within the aerospace and defence sector of India.

During the process of manufacturing in India, it is expected that all the suppliers of TATA Consortium who will be involved in special processes will gain and maintain globally recognized National Aerospace and Defence Contractors Accreditation Program (NADCAP) accreditation.

The Minister stressed on the interconnectedness of national and regional security