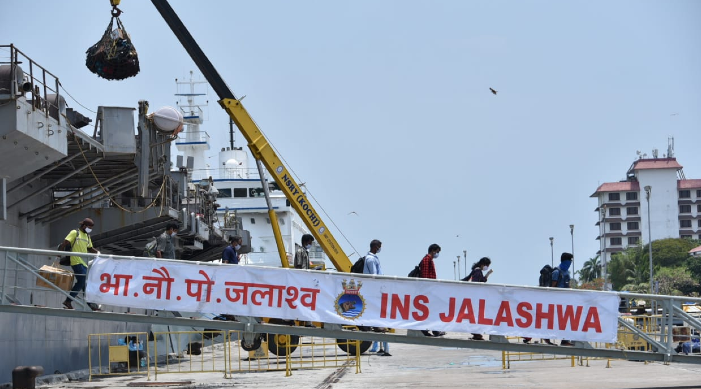 As many as 588 Indian citizens, including 70 women and 6 expectant mothers arrived in Kochi from Maldives on Sunday on board INS Jalashwa.

According to a statement issued by the Ministry of Defence, this was under operation ‘Samudra Setu’ second voyage of INS Jalashwa to bring back Indians stranded in Maldives due to Covid-19 triggered lockdown.

Berthed alongside at Cochin Port Trust, the naval ship was received by the personnel from Indian Navy, state government, district administration and port trust.

Extensive arrangements were also made by the Port authorities for streamlining the process of COVID screening and immigration procedures as also by the civil administration for transportation for the evacuated Indian nationals to respective districts and states for further quarantining.

On May 16, INS Jalashwa had departed for Male as part of the government's efforts to facilitate return of Indian citizens from foreign shores.

The naval ship was expected to depart for the Indian Ocean country on May 15, but on account of inclement weather, accompanied by heavy rains and strong winds, its departure was delayed by a day.