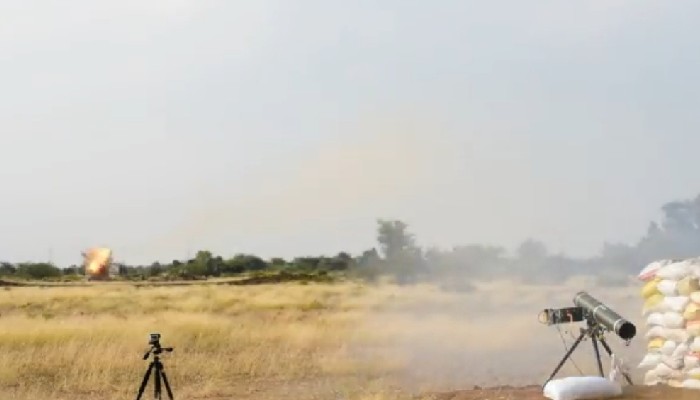 The missile hit the target with pin point accuracy.

The missile has miniaturised infrared imaging seeker and advanced avionics

The indigenously developed anti-tank missile is a low weight, fire & forget missile and is launched from a man portable launcher, integrated with thermal sight.

The missile tested by the Defence Research and Development Organisation (DRDO) impacted the designated target and destroyed it. "The final impact event was captured on camera and the test has validated the minimum range successfully," said a press release issued by the Ministry of Defence.

Tuesday's test was to prove the consistent performance for the minimum range. All the mission objectives were met, the ministry added.

The missile has miniaturised infrared imaging seeker and advanced avionics for on-board control and guidance. The missile performance has been proven for the maximum range in earlier test trials.

Defence Minister Rajnath Singh has congratulated DRDO for the consistent performance of the anti-tank missile. He said that this is an important step towards Atmanirbhar Bharat in advanced technology-based defence system development.

Secretary Department of Defence R&D and Chairman DRDO G Satheesh Reddy congratulated the team for the excellent performance of the missile during the test.