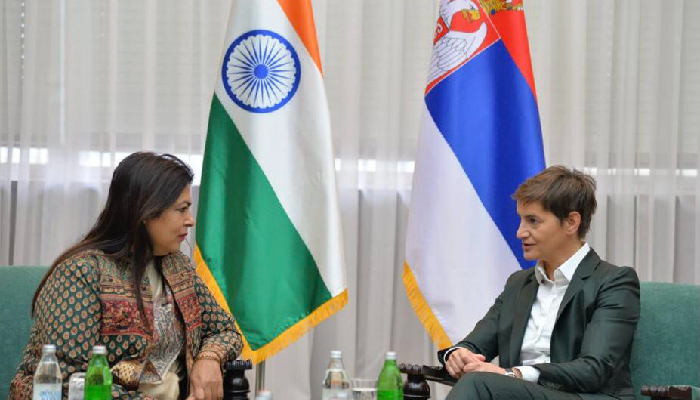 Minister of State for External Affair Meenakashi Lekhi who is on a three-day visit to Serbia on Tuesday held a meeting with Southeast European country’s Prime Minister Ana Brnabic and held wide ranging discussion in areas, including enhancing trade, cultural exchanges and people-to-people contacts.

During the meeting, both sides agreed to continue to add further substance and ambition to their bilateral relationship.

MoS External Affairs Lekhi is visiting Serbia as the special envoy of Prime Minister Narendra Modi to attend the high-level commemorative meeting to mark the 60th anniversary of the Non-Aligned Movement.

In the course of her visit to Belgrade, the MoS External Affairs also met Serbia’s Deputy Prime Minister and Defence Minister Nebojsa Stefanovic and discussed identifying mutually beneficial opportunities in the defence sector, including possibilities of collaboration in Make in India and transfer of technology.

Last month, the Serbian Foreign Minister had paid a two-day (September 19-20) official visit to India. During that visit, he had called on Vice President Venkaiah Naidu and held discussions with EAM S Jaishankar and MoS External Affairs Meenakashi Lekhi.

During her visit, MoS Lekhi also delivered a lecture on ‘Structure of Judiciary in India’ at the Law Faculty of the University of Belgrade.

“A trip down memory lane for me as I interacted with the students & teachers at the historic Faculty of Law, University of Belgrade. Found them deeply interested in knowing more about India’s institutional strengths that underpin our success as world’s largest democracy,” she tweeted.