'Do away with Non-Tariff Barriers': Piyush Goyal to ASEAN bloc 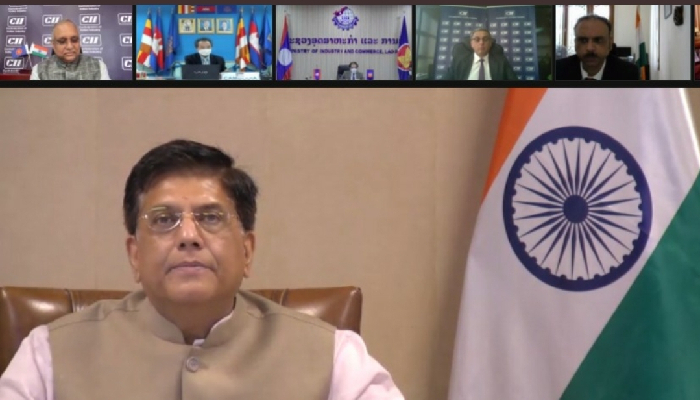 Union Minister for Commerce & Industry Piyush Goyal has called upon the ASEAN bloc to do away with Non-Tariff Barriers (NTBs).

He has also called for “curbing the misuse of Free Trade Agreements (FTAs) by third parties, often outside the ASEAN Region.”

Goyal was addressing the “Special Plenary with the Trade Ministers of the Region: Indo-ASEAN Business”, organised by the CII, on Friday.

“It is unfortunate that in the recent past we had to deal with several restrictive barriers on our exports to the ASEAN region, particularly in the Agriculture & Auto sector. I think these only result in reciprocal action from other countries including from India, and will hurt the long term desire of our leaders to expand trade between the two countries,” said Goyal, in his address through video conference.

He called upon the ASEAN Bloc to allow reciprocal FTA concessions to imports from India to correct the skewed trade imbalance in favour of the ASEAN.

“India has currently been witnessing exponential growth in imports from the ASEAN Region while our exports have been impeded by non-reciprocity in FTA concessions, NTBs, import regulations, quotas & export taxes from ASEAN countries. Such a review will enable alignment with contemporary trade practices, procedures & regulatory harmonization,” Goyal added.

According to the Commerce & Industry Minister, the current trade of about $80 Billion makes Indo-ASEAN region one the largest trading areas globally.

"Despite increasing trade we are short of the target of $200 bn, which India & ASEAN were to achieve by 2022,” he pointed out.

“During COVID-19 pandemic, India has shown its capacity and its capability to the entire world. We not only met all our international service commitments but also became self-sufficient in production of critical medical supplies including PPEs,” he said.

Pointing out that India was known as the “Pharmacy of the World”, he said India would give ASEAN nations full cooperation in generic drugs and vaccine manufacturing to meet their demands.

He reiterated that a prosperous ASEAN was central to India’s Vision for Indo-Pacific region with Security And Growth for All in the Region (SAGAR).

“With a combined population of 2.1 billion, India & ASEAN countries are home to rapidly growing markets with immense opportunities. By combining our strengths, we can rewrite and make a golden chapter of progress and prosperity for the 30 percent of the world population that reside in ASEAN countries and India,” Goyal said.

Affordable telecom services will lead to digital transformation to the next level, he said