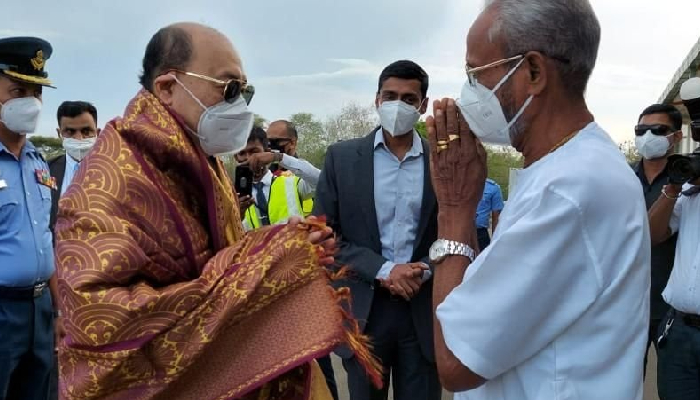 Terming Foreign Secretary Harsh Vardhan Shringla’s recent visit to Sri Lanka ‘very successful’, the Ministry of External Affairs (MEA) on Thursday said India attaches equal importance to the Trincomalee Oil Tank Farm as it does to other economic projects which are beneficial for both countries.

“He met the Sri Lankan leadership including the President, Prime Minister and other ministers and his counterpart as well as the Tamil political leaders,” he added.

“Shringla looked at the development projects that were launched during his visit--there were four of them,” said the MEA Spokesperson.

“He took up the reconciliation process in Sri Lanka and talked about the need to address the issues of Indian fishermen, the humanitarian issue, the issue of support to livelihoods of fishermen of Northern Sri Lanka,” Bagchi added.

“The Foreign Secretary visited Kandy, Trincomalee and Jaffna,” he added.

Replying to a query on the discussion in Sri Lankan Parliament by some MPs over the leasing of Trincomalee Oil Tank Farms to India, the MEA Spokesperson said “there are a number of agreements on this, the first such being way back in 1987.

But, there have been more agreements on how to utilize those tanks in the best way.”

“This is an issue that we attach importance to as we do to other economic projects which we believe are beneficial for both countries. The project is certainly one of them on our agenda and good discussions took place during the visit. Let’s see how to take this forward,” he mentioned.

According to a statement issued by the Indian High Commission, during the visit, Foreign Secretary Shringla called on the President of Sri Lanka, Gotabaya Rajapaksa, the Prime Minister Mahinda Rajapaksa, Minister of Finance Basil Rajapaksa and the Minister of Foreign Affairs Prof. GL Peiris, it stated.

The Foreign Secretary also travelled to Kandy, Trincomalee and Jaffna, signifying their cultural, economic and historical importance, respectively, it informed.

According to the Indian High Commission statement, in Trincomalee, Foreign Secretary Shringla visited the Oil Tank Farms, a symbol of the potential and strong energy partnership between India and Sri Lanka where LIOC briefed him about the development undertaken by it at the Lower Tank Farms and its advantages to Sri Lanka’s economy.

During his visit to Jaffna, the Foreign Secretary inspected the Jaffna Cultural Centre and interacted with the Governor of Northern Province, several Members of Parliament, academicians and business leaders.