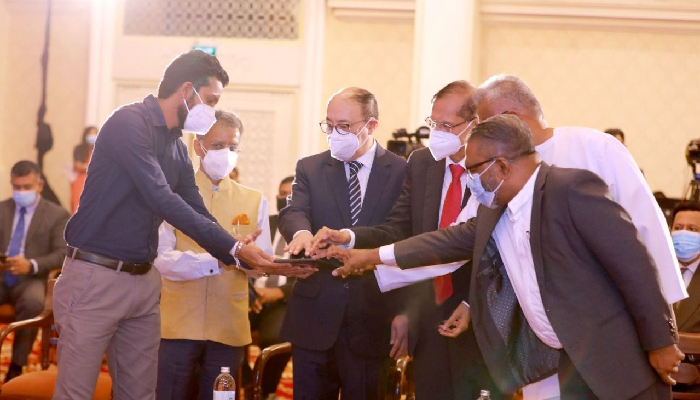 Giving a boost to the ongoing development cooperation with Sri Lanka, India on Monday handed over four projects in the housing and education sectors to the island country.

At Temple Trees, the official residence of the Sri Lankan Prime Minister in Colombo, Foreign Secretary Shringla jointly inaugurated the development projects with Sri Lankan Foreign Minister GL Peiris in presence of several Cabinet Ministers and Members of Parliament, said the Ministry of External Affairs in a statement.

This project is a part of India’s biggest grant assistance project in Sri Lanka for the construction of 50,000 houses at a cost of INR 1372 crore across various Districts in Sri Lanka.

Under Phase III of IHP a total of 4000 houses are to be built. Out of which, more than 3500 houses have been completed, construction of around 400 houses is going on and 63 houses are yet to start.

The project is being implemented as a High Impact Community Development Project, under which 24 houses are being built for low-income families in each of the 25 districts, including Vavuniya district.

The project at Vavuniya District is complete and was handed over to Sri Lanka.

The third project to be handed over is the Vada Central Ladies College in Vadamarachi, Northern Province of Sri Lanka.

It is aligned with Government of India’s continued commitment to build improved educational infrastructure in Sri Lanka, a project for renovation of 27 schools in Northern Province was taken up by India as a grant assistance project at a cost of SLR 250 million.

Out of 27 schools, 22 school buildings have been completed and handed over so far. Vada Central Ladies College in Vadamarachi is one of the 27 schools taken up for renovation and was handed over during this visit.

The fourth and the final project to be handed over was the Saraswathi Central College in Pusellawa, Kandy district.

This project is being implemented as a High Impact Community Development Project under Indian grant assistance.