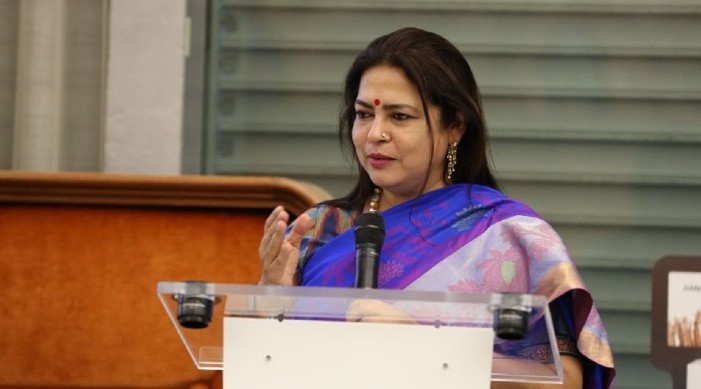 Minister of State for External Affairs Meenakshi Lekhi, on Thursday addressed the members of the international community in Geneva on 75 years of India’s Independence and attended a cultural event.

Maintaining about this development, she tweeted: “Glad to address the members of international community in Geneva on 75 years of India’s independence #AzadiKaAmritMahotsav and attended cultural event – splendid saga of Indian sarees and ICCR sponsored Khadi Tapestry Exhibition.”

Earlier on Wednesday, MoS Lekhi called on President of the Swiss Confederation Guy Parmelin at Federal Palace in Bern and discussed the entire gamut of bilateral relations.

During the meeting, both sides also agreed to take forward their trade relations and people-to-people contacts.

“Honoured to call on Guy Parmelin, President of the Swiss Confederation at Federal Palace, Bern. Had a productive meeting, we discussed the entire gamut of bilateral relations and agreed to take forward our strong trade relations and people to people contacts, MoS Lekhi tweeted.

On Tuesday, she attended the inaugural Impact Finance Conference organized by Neue Zurcher Zeitung. Speaking on the theme of sustainability and climate change at the event, she said despite having the lowest per-capita carbon emission in the world, India has agreed to reduce the carbon intensity by 33-35 percent of its GDP.

She said India has agreed to increase the share of non-fossil fuel energy sources in its power generation capacity to at least 40 percent.

The MoS for External Affairs also said that India has decided to create an additional carbon sink of 2.5 to 3 billion tonnes of Co2 equivalent by 2030. To this commitment, the government, she said, has supplied 1.2 billion energy efficient LED Lamps and 3.2 million LED streetlights.

She said attempts are being made to turn India into the world’s largest Green Hydrogen Hub. “India is among the top 5 countries whose actions are on track to keep global warming below the 2 degree Celsius target. We are walking the talk on our commitments related to climate change,” the MoS said in her address at the event.

She said despite development challenges, India has taken many bold steps on clean energy, energy efficiency, afforestation and bio-diversity.

India’s focus is also on cutting the energy consumption and efficient management of energy produced.

During her visit to Switzerland, the MoS External Affairs also got an opportunity to meet women parliamentarians, secretaries and exchanged views on women empowerment and shared major achievements of India towards empowerment of women.

According to the Ministry of External Affairs, the visit of the MoS will help in sustaining the momentum in bilateral ties between the two countries.