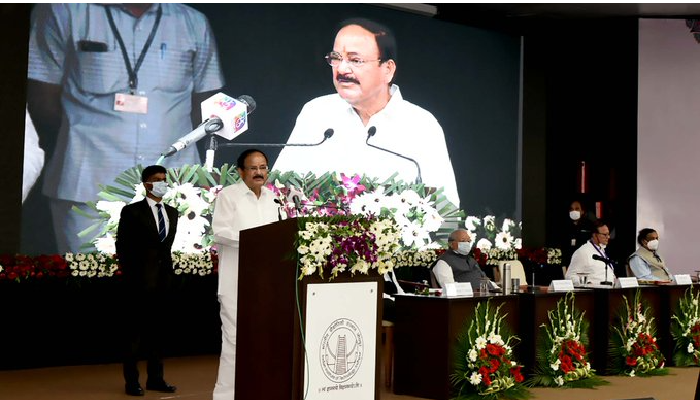 Educational institutions, researchers and developers should come out with practical AI solutions in agriculture, health and education, said the Vice President

Vice President M. Venkaiah Naidu who is on a five-day visit to Rajasthan on Tuesday called for tapping the potential of revolutionary technologies like Artificial Intelligence (AI) to deliver benefits to the people and enhance the quality of life.

In this regard, he urged educational institutions, researchers, and developers to come out with practical AI solutions in the fields of agriculture, health, and education.

Enumerating possible applications for AI, Naidu suggested industry and developers to work towards solutions for precision agriculture to ensure quality farm output, to bring about efficient grading of the produce, and to enable better price discovery for farmers.

He also suggested exploring AI-based smart solutions in health such as remote diagnosis, and automatic translation of English texts to Indian languages in education.

“If such solutions can be scaled up, even a small gain in efficiency and productivity can bring positive change in the lives of millions of people”, Naidu said.

Addressing a gathering at IIT Jodhpur after laying the foundation of fabrication laboratory for Artificial Intelligence of Things (AIoT), Naidu remarked that technologies like AI and AIoT have been revolutionizing many sectors of the global economy in the last decade.

He said that the ultimate aim of science and technology is to transform the lives of the people. “That should be the aim for the development of AI too”, he added.

Reflecting on the possibilities of AI in governance, Naidu advised governments to explore using AI to improve timely delivery of services.

He mentioned the example of Direct Benefit Transfer through Jan-Dhan accounts and said that this has plugged leakages and protected people from exploitation to a great extent. Therefore, he also urged universities to work with local governments and develop intelligent solutions in governance and welfare.

The Vice President further observed that such collaboration can give exposure to the students, test their knowledge in the real world, and enable them to come out with innovative solutions to some of society's long-standing problems.

Touching upon the economic potential of AI, Naidu noted that AI has the potential to add USD 957 billion or 15% of the current gross value added to India's economy by 2035.

Highlighting that AI could possibly displace many routine jobs, the Vice President stressed the importance of skilling and training youth to match the demands of changing job markets in the time of Industrial Revolution 4.0.

He lauded the recent decision of 14 engineering colleges across eight States to offer courses in regional languages and called for more such professional courses in higher education in Indian languages.

He also said that AI holds immense potential in promotion of Indian languages by way of automatic translation from English and other languages.

On the occasion, the Vice President inaugurated the Jodhpur City Knowledge and Innovation Cluster (JCKIC) at IIT Jodhpur. Noting that India has risen from the rank of 81 in 2015 2to 46 in 2021 in the Global Innovation Index, Naidu said "innovation should become the national mantra for development".

Speaking on the power of collaboration, the Vice President highlighted that collaboration between various institutions can bring out synergies and deliver great developmental benefits to people.

Observing that water is a scarce commodity in Rajasthan, he called for more collaborative efforts in water management and rainwater harvesting to mitigate the water crisis in the region.

Complimenting the JCKIC cluster for its efforts in this direction, he suggested that educational institutes should become the hubs of such innovation clusters.

The Vice President called upon premier Institutions like IITs to share expertise and best practices with other educational institutes. “Innovation and collaboration should be embedded into the very DNA of higher education institutions”, Naidu stressed.

Terming the National Education Policy 2020 a visionary document, the Vice President said NEP recognizes the importance of multi-disciplinarily in education, encourages collaboration, and seeks to foster innovation in students.

He added that in the spirit of NEP 2020, universities must also offer flexibility in their curriculum.

In this context, the Vice President suggested that students must be incentivized to pursue final year projects and internships in diverse fields and allowed to collaborate with students of other disciplines.

Naidu opined that such a move will improve students' capacity for critical thinking and help in opening new vistas of knowledge.

The Vice President appreciated the efforts of IIT Jodhpur and other institutions in the knowledge and innovation cluster which is trying to bring developmental benefits to the people of the region.

He called for more such innovation clusters and collaborative initiatives between various universities, government institutions and private organisations which, he said, can build on each other's expertise and share knowledge.