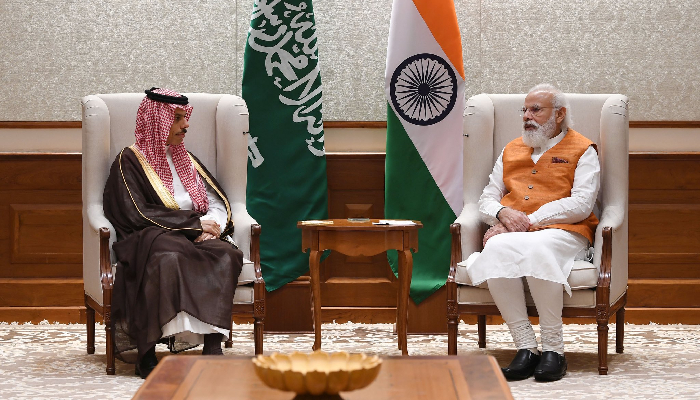 India is seeking investment from Saudi Arabia in key sectors like energy, IT and defence manufacturing

Prime Minister Modi expressed India's keenness to see greater investment from Saudi Arabia, including in key sectors like energy, IT and defence manufacturing.

The meeting also allowed exchange of perspectives on regional developments, including the situation in Afghanistan.

The Prime Minister conveyed his special thanks and appreciation to the Kingdom of Saudi Arabia for looking after the welfare of the Indian diaspora during the COVID-19 pandemic.

Prime Minister Modi also conveyed his warm greetings and regards to the King and the Crown Prince of Saudi Arabia.

On Sunday, the visiting Saudi Foreign Minister held a bilateral meeting with EAM Jaishankar and reviewed the implementation of the Strategic Partnership Council Agreement signed between the two sides during the visit of Prime Minister Narendra Modi to Saudi Arabia in October 2019.

They expressed satisfaction at the meetings held under the Agreement and progress achieved. Both sides discussed further steps to strengthen their partnership in trade, investment, energy, defence, security, culture, consular issues, health care and human resources.

Both Ministers exchanged views on the developments in Afghanistan and other regional issues. They also discussed bilateral cooperation in multilateral forums such as UN, G-20 and GCC. The EAM congratulated Saudi Arabia on its successful Presidency of G-20 last year despite the Covid-19 pandemic.