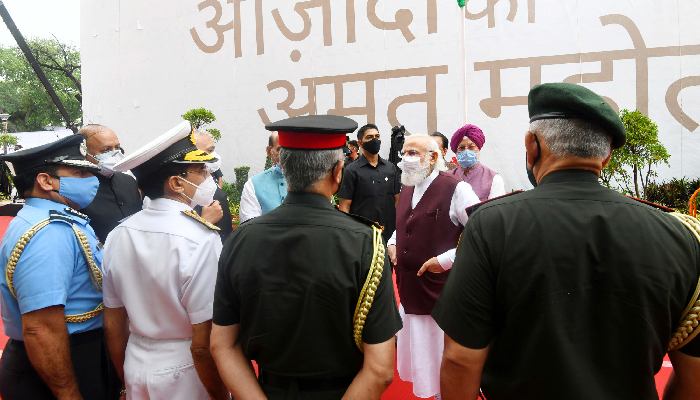 While addressing the gathering the Prime Minister said that in today’s inauguration of complexes, India has taken another step in developing the nation’s capital according to needs and aspirations of a new India in the 75th year of India’s independence.

He lamented the fact that for a very long time the defence related work was being conducted from hutments constructed during the Second World War which were made keeping in mind horse stable and barracks needs.

“This new defence office complex will strengthen the efforts of making the working of our defence forces convenient and effective”, he said.

The Prime Minister said these modern offices built at KG Marg and Africa Avenue, will go a long way in effectively carrying out all the work related to the security of the nation. This is a big step towards the construction of a modern defense enclave in the capital.

He appreciated the inclusion of attractive artefacts by Indian artists in the complexes as symbols of AaatmNirbhar Bharat.

“The complexes reflect the modern form of diversity of our culture while preserving the vitality of Delhi and environment”, he said.

“When we talk about the capital, it is not just a city. The capital of any country is a symbol of the thinking, determination, strength and culture of that country. India is the mother of democracy. Therefore, the capital of India should be such, in which there are citizens, people in the center,” the Prime Minister added.

The Prime Minister stressed the role of modern infrastructure in the government’s focus on ease of living and ease of doing business.

The Prime Minister said the work of the Defense Office Complex which was to be completed in 24 months has been completed in a record time of just 12 months. That too when all the other challenges ranging from labor were to the fore in the circumstances created by Corona.

Hundreds of workers got employment in this project during the Corona period. The Prime Minister credited this to a new thinking and approach in the government’s functioning. “When policies and intentions are clear, will power is strong and efforts honest, everything is possible”, said the Prime Minister.

The Prime Minister said that these defence office complexes are the manifestation of changing work culture and priorities of the government.

Optimal and proper use of available land with various departments of the government is one such priority, he said. Illustrating thi, the Prime Minister informed that these defence office complexes are constructed in 13 acre land parcels unlike earlier times when five times more land was used for similar complexes.

The Prime Minister also highlighted that in next 25 years i.e. ‘Azadi ka Amrit Kaal’ productivity and efficiency of the government system will be supported by such efforts. Availability of a common central Secretariat, connected conference hall, easy connectivity like metro will help a great deal in making the capital people-friendly, the Prime Minister concluded.