LeT and Jaish-e-Mohammad continue to operate with impunity: Jaishankar at UNSC 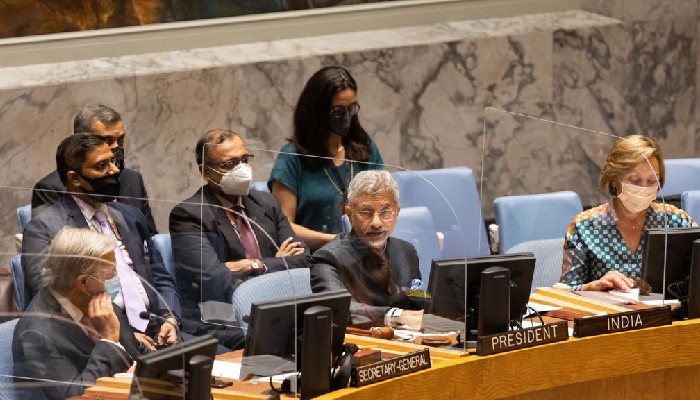 EAM S Jaishankar at the UNSC

Whether it is in Afghanistan or against India, terror groups like Lashkar-e-Taiba and Jaish-e-Mohammad continue to operate with impunity,” EAM S Jaishankar said

External Affairs Minister S Jaishankar on Thursday conveyed India’s concern at the unfolding situation in Afghanistan and its implications for both regional and international security.

In his address to the UNSC in New York, he said: “The heightened activities of the proscribed Haqqani network justify the growing anxiety. Whether it is in Afghanistan or against India, terror groups like Lashkar-e-Taiba and Jaish-e-Mohammad continue to operate with impunity and encouragement.”

“In our own immediate neighbourhood ISIL-Khorasan has become more energetic and is constantly seeking to expand its footprint. This should be taken seriously,”Jaishankar said while speaking on the issue of “Threats to international peace and security caused by terrorist acts.”

He cautioned the UNSC against taking a selective, tactical or complacent view of the problems the Council faces in Afghanistan, saying that it must never tolerate sanctuaries for terrorists or overlook raising of their resources.

“It is therefore vital that this council does not take a selective, tactical or even a complacent view of problems we face. We must never countenance sanctuaries for terrorists overlooking raising of their resources,” he argued.

Jaishankar said the latest report to the UN Secretary General has provided another "stark reminder to all of us that ISIL-Daesh continues to pose a critical threat to international peace and security."

This organization continues to remain active in Syria and Iraq and its affiliates are growing in strength particularly in Africa, he added.

“The financial resource mobilization of ISIL-Daesh has become more robust, the flow of funds have continued and rewards for killings are even being paid in bitcoin,” the EAM observed.

He said the radicalization of youth by systematic online propaganda campaigns remains a serious concern.

Reiterating that the international community holds a collective view that terrorism in all its forms and manifestations must be condemned, the EAM said, there cannot be any exception or justification for any act of terrorism, regardless of motivation behind such acts.

“We also recognize that the menace of terrorism cannot be and should not be associated with any religion, nationality, civilization or any ethnic group,” he said.

However, in spite of the progress we have made to tighten the legal, security, financing and other frameworks to combat terrorism, terrorists are constantly finding newer ways of motivating, resourcing and executing acts of terror, the EAM pointed out.

“Unfortunately, there are also some countries who seek to undermine or subvert our collective resolve to fight terrorism. That cannot be allowed to pass,” he warned.