With fresh wave of Covid hitting China hard, Beijing finds it difficult to tell the truth 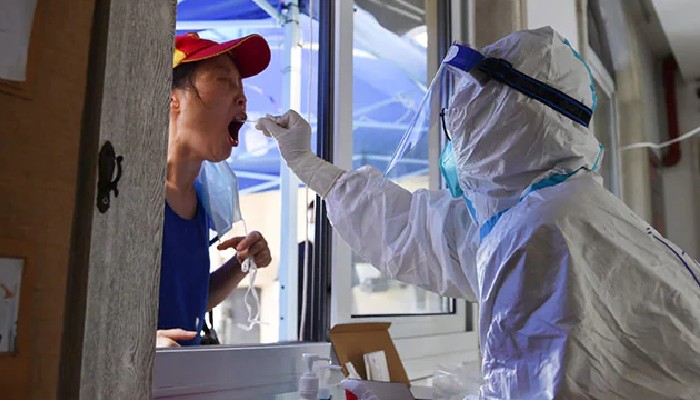 China has launched mass testing in Wuhan and several other cities across the country.

China is smarting under a fresh wave of Covid pandemic outbreak as within a span of a week, hundreds of cases have been detected.

Given that this time, China has been hit by a virulent Delta variant, the Chinese government has started mass testing in several parts of the country with travel restrictions and lockdown once again imposed in towns and cities.

Till a few weeks ago, China used to make fun of India’s anti-Covid measures. In April-May, when India was fighting hard to save its people from Coronavirus-triggered deaths, an insensitive China on its social media platform posted a picture of a rocket launch alongside a photo of India’s Covid victims being cremated on a funeral pyre. The caption read: “Lighting a fire in China Vs lighting a fire in India.”

Call it a turn of the wheel of fate, China is currently advancing towards almost the same phase of its battle with the pandemic India had witnessed in April and May. But then, who will tell common Chinese people that the virus which continues to singe them is man-made and developed in a lab in Wuhan?

Perhaps, the authoritarian system of the country would not allow them to know the truth. Even the world would not be able to get to the bottom of things as China has rejected a World Health Organization plan for another Covid-19 investigation inside the country. With this rejection for a probe into the origin of the virus, the world has been denied critical data needed to identify and forestall future pandemics.

But it has deepened the growing suspicion that China intentionally engineered the virus for reasons best known to President Xi Jinping and his confidants in the Communist Party of China. It confirms British scientist Professor Angus Dalgleish and Norwegian scientist Dr Birger Sorensen’s claim that the Chinese took a natural coronavirus backbone found in a bats’ cave in China and spliced onto it a new spike, turning it into a fatal and highly transmissible Covid-19.

These scientists’ study somewhere supported a theory that a relative of SARS-CoV-2, RATG13, a Coronavirus, was collected from a mineshaft in Mojiang of Yunnan province in South China by the Wuhan Institute of Virology. It is said that the mineshaft was infested with bats and six miners hired to clean the fecal matter of bats were infected with pneumonia-like illness. Three of them had died of it.

Almost similar views were earlier expressed by people working for DRASTIC, a group which claimed that a lab leak from the Wuhan Institute of Virology was the cause of the Covid-19 pandemic.

According to DRASTIC, the Wuhan Institute of Virology had an extensive collection of Coronavirus gathered over many years of foraging in the bat caves, where three men had died from a suspected SARS-like disease in 2012.

Both Professor Angus Dalgleish and Dr Birger Sorensen’s study published by ‘Quarterly Review of Biophysics Discovery,’ a noted British journal, claimed that they had prima facie evidence of retro-engineering in China. They further alleged deliberate destruction, concealment or contamination of data in Chinese labs and silencing and disappearance of scientists in China who spoke about the activities there.

Doctor Li Wenliang, an ophthalmologist in Wuhan, the epicenter of Covid-19, was summoned by police and medical officials in the middle-of-the night in early January 2020 and warned for raising an alarm that a troubling cluster of viral infections in Hubei province could grow out of control. Doctor Li, 34, was forced to sign a statement denouncing his alarm as an unfounded rumour.

Despite this, before he could continue his fight for the sake of humanity, the Wuhan City Central Hospital in the first week of February 2020 informed Li’s family members and friends through Weibo that the doctor died. “Dr Li had the misfortune to be infected during the fight against the novel coronavirus pneumonia epidemic, and all out-efforts to save him failed” the Wuhan City Central Hospital wrote on Weibo. Dr Li is remembered as the first whistleblower who warned about the contagiousness of the virus.

Dr Li-Meng Yan, a scientist who is still in hiding over fear of her safety, opened a can of worms against the Chinese government by stating that she did some of the earlier research into Covid-19 in 2019. Speaking from a secret location to the British talk show “Loose Women,” in September 2020, she said the virus “comes from the lab—the lab in Wuhan and the lab is controlled by China’s government.” She also insisted that widespread reports that the virus originated in 2019 from a wet market in Wuhan are a “smoke screen.”

Amid this, if China denies WHO a fresh probe into the origin of the deadly virus, it amounts to strengthening worldwide negative sentiments against China and the CPC.

In April 2020, the China Institute of Contemporary International Relations, a government-affiliated think tank associated with China’s top intelligence agency, had already warned the Chinese government that global anti-China sentiment is at its highest since the 1989 Tiananmen Square crackdown.

Surprisingly, those countries where China has invested heavily by pumping in money for the development of dams, roads, power stations, railway lines, metros, football stadiums, airports, seaports under the Belt and Road Initiative are also bristling with anti-China sentiments.

Already, China’s image as a human rights violator, intellectual property rights usurper and an expansionist that doesn’t spare even its allies and neighbours in forcibly occupying territories is under battering at various international forums. The US, Europe, Japan, South Korea, India, Australia and Vietnam detest China for its deceptive character.

In the backdrop of the prevailing situation, sanity demanded that the Chinese government would bring a balance in its behaviour and let WHO probe properly into the origin of the coronavirus. It should have allowed the world body to undertake a follow-up to the January 2021 investigation, which was initially blocked and subsequently hampered by authorities.

Unfortunately, China in one stroke dashed the international community’s keen desire to know the truth about the emergence of the virus by rejecting the WHO plan for investigation into the Wuhan lab. It has also denied its people a chance to come out fighting fit against the deadly virus.