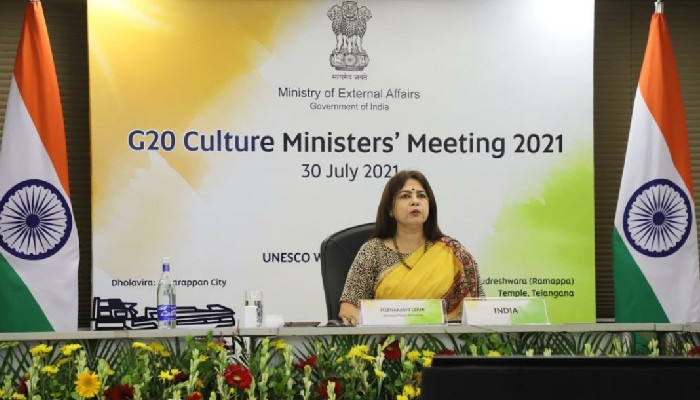 India is committed to international cultural cooperation and collaboration, reiterated Minister of State (MoS) for External Affairs and Culture Meenakashi Lekhi during the G20 Culture Ministers Meeting hosted by Italy.

Addressing the participants of the meeting held on Friday, MoS Lekhi presented India’s perspective on the topic ‘Culture and Creative Sectors as drivers for growth’.

“She outlined the significance of culture and creative sectors in providing economic growth and employment as well as its potential to give more opportunities to women, youth and to local communities which have very rich and diverse cultural traditions and practices, to promote production and consumption practices that are more environmentally friendly as in the production of handlooms, handicrafts and khadi etc. and its importance and relevance for India,” the Ministry of External Affairs said in a release.

The MoS emphasized that culture and creative sectors can drive growth through generating employment, reducing inequalities, promoting development in a sustainable manner, and providing distinct identities to people.

She highlighted the various measures taken by India to develop the cultural and creative sectors like the One District One Product scheme of the Government of Uttar Pradesh, Tourism circuits, promotion of Yoga and Ayurveda etc.

Further, the Minister emphasized and supported the need for international dialogue and collaboration to tackle common issues connected to the cultural and creative sectors and to suitably inform and adopt public policies.

At the end of the discussions, the G20 Ministers of Culture adopted the G20 Culture Working Group Terms of Reference.

The Ministers of Culture of the G20 adopted the Ministerial Declaration for submission to the G20 Leaders' 2021 Summit to advocate the introduction of Culture in the G20 workstream, given its strong economic and social impact at the national and global level.