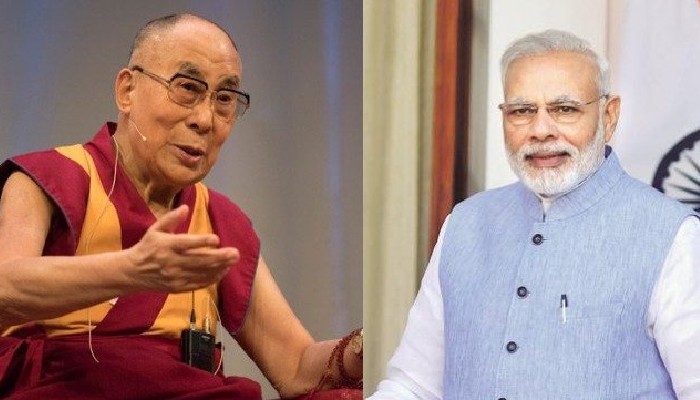 In 2015, Narendra Modi as the PM tweeted his thanks to the Dalai Lama for his greetings on his birthday.

It has never been easy to understand China. There is a huge gap between Chinese leaders’ statements and their actions. But clearly, they have huge capacity to hide the truth from coming out.

For an entity, individual or a nation, it is hard to keep secrets under carpet for long; the Chinese have, over the years, mastered the art of fudging things, sidestepping facts and launching hackneyed misinformation campaigns against those who don’t subscribe to their viewpoints.

Global Times editor Hu Xijin in an editorial on July 7 bashed India and the Prime Minister for conveying greetings to the Dalai Lama on his 86th birthday on July 6, 2021. Since it came close on the heels of India refusing to extend greetings to the Communist Party of China on its 100th foundation day on July 1, the Global Times, the English-language tabloid belonging to the People’s Daily, which is the CPC’s official organ, termed it as a display of “attitude.”

As US Secretary of State Antony Blinken also greeted the Dalai Lama on his birthday, the English-language tabloid saw it as “provocations.” The tabloid, which is known for its aggressive, biased and prejudicial views against democratic countries, described the personal salutation to the Tibetan spiritual leader as “external forces” attempt to “play the card of the Dalai Lama.”

This seems to be an over reaction. China should know that the Tibetan spiritual leader shares very good equation with all political parties and leaders in India. His personal bonding with Prime Minister Narendra Modi is well known. When Modi was the Chief Minister of Gujarat, the Dalai Lama had frequently visited India’s western state.

In 2011, he had visited the state to teach leadership at the Indian Institute of Management in Ahmedabad. In January 2013, he landed at Vadodara to inaugurate the international seminar on Buddhist Heritage at the Maharaja Sayajirao University. Modi as the Gujarat Chief Minister had participated the four day event which was also attended by Buddhist monks from the US, the UK, Japan, Sri Lanka and other foreign countries.

Clearly, the two share bonhomie between them and this is what tweet by Prime Minister Modi of his greetings to the Dalai Lama on his birthday indicates. China thinks the Indian Prime Minister has hurt China’s sensitivity by publicly displaying his affection towards the Tibetan spiritual leader.

Beijing should avoid entering into the choppy waters of politics and shun interpreting everything in strategic terms. If it is so touchy about its national sensitivity, it is expected that it should also have the same understanding about the sensitivity of others.

More than 17 months have passed, yet China continues to occupy friction points - Hot Springs, Gogra and Depsang - in Eastern Ladakh. Several rounds of talks have taken place between senior commanders of the two countries, but a stalemate continues on the issue of vacating these friction points by China.

However, this is not the lone case of Beijing overlooking India’s sensitivity.

Despite constant reminders, China is engaged in developing infrastructure in occupied areas of Jammu and Kashmir. In the name of China-Pakistan Economic Corridor, which is an extension of Beijing’s ambitious Belt and Road Initiative, China has built bridges, roads, dam, power stations in occupied Jammu and Kashmir. All this, it does by trampling on India’s sensitivity for its sovereignty, unity and integrity.

But when it comes to the Prime Minister tweeting birthday greetings to the Dalai Lama, China gets offended and describes Prime Minister Modi’s act of salutation to the highly revered Tibetan spiritual leader as “despicable.” This is a double standard. China needs to first correct its behaviour towards its neighbours.

Instead of sermonizing them on issues of national sensitivities, China should first do what it expects from others. It has forcefully laid claim on the entire South China Sea. It uses its military muscle to threaten Japan on the issue of Senkaku Islands, a group of uninhabited islands in the East China Sea. Chinese ambassador to Bangladesh Li Jimming threatens Dhaka that if it joins India, US, Japan and Australia-led quad, it will “substantially damage” bilateral relations with China.

In April 2021, Chinese ambassador to France Lu Shaye warns French lawmakers from meeting officials in Taiwan during their visit to Taipei. Earlier in October, 2020, China tells Indian media not to call Taiwan a country.

The overall impression China has created for itself is that the world should honour its sensitivities, no matter how it treats others geographical, economic and sovereign interests.