Chief of Army Staff, General MM Naravane on Wednesday concluded his two-day visit to the Line of Control in the Jammu sector and took stock of the ground situation. This was his first visit to the LoC after India and Pakistan agreed to abide by the 2003 ceasefire agreement.

“Gen MM Naravane #COAS concluded a two-day visit to the units & Formation HQs deployed along the Line of Control in the Jammu Sector. On 11 May 2021, #COAS was briefed by GOC #WhiteKnightCorps on the prevailing security situation & operational preparedness in the Corps Zone,” said the ADG PI- Indian Army tweet. 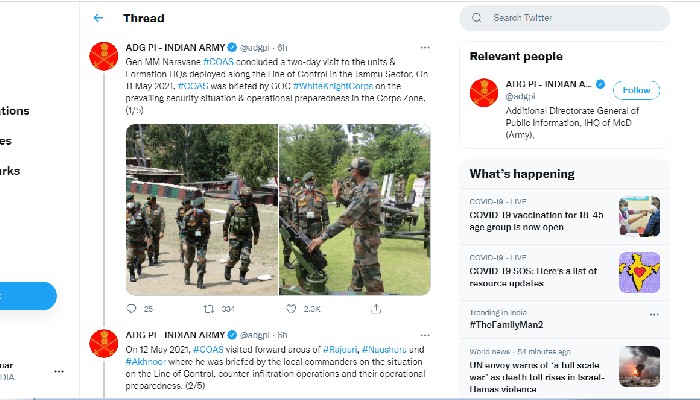 In the course of his two-day visit, the Army Chief reviewed the situation of the areas under the command of the Nagrota-based White Knight Corps and visited forward areas in Akhnoor, Rajouri and Naushera to review counter-infiltration preparedness.

“On 12 May 2021, #COAS visited forward areas of #Rajouri, #Naushera and #Akhnoor where he was briefed by the local commanders on the situation on the Line of Control, counter-infiltration operations and their operational preparedness(2/5),” the ADG PI- Indian Army said in his second tweet. 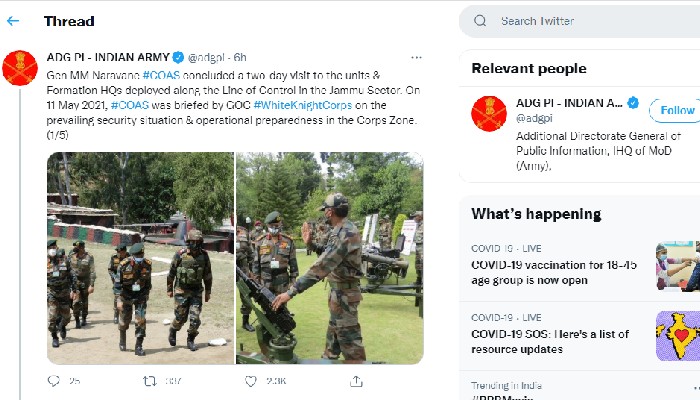 “#COAS interacted with the troops & complimented them for their high morale & high state of operational preparedness. (3/5),” he said in his third tweet.

The Army Chief appreciated the current state of peace prevailing along the LoC, while also cautioning all commanders and troops to be prepared to meet any emerging security challenges effectively.

“While appreciating the current state of peace prevailing along the #LineofControl, he cautioned all commanders & troops to be prepared to meet any emerging security challenges effectively. (4/5),” the ADG PI- Indian Army said in his tweet.

“#COAS also complimented all government agencies for their close coordination in maintaining peace in the region and reaching out to the people wholeheartedly to combat the spread of the COVID-19 pandemic. (5/5),” the ADG PI- Indian Army said in his last tweet.