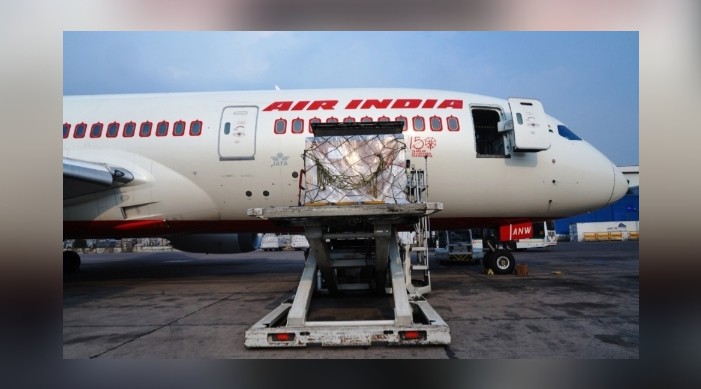 As India continues to reel under the second wave of the Covid-19 pandemic, humanitarian assistance from nations round the globe has continued to pour in with New Delhi receiving emergency supplies from the UK and Republic of Korea on Sunday.

A consignment of three oxygen generators and 1,000 ventilators arrived from the UK, tweeted the Ministry of External Affairs Spokesperson Arindam Bagchi. This support received on Monday is in addition to 200 ventilators and 495 oxygen concentrators which the UK sent to India late April.

“Taking forward our Comprehensive Strategic Partnership. Consignment of 3 O2 generators & 1,000 ventilators arrives from UK. Each generator has capacity to produce 500 litres of O2/min, enough to treat 50 people at a time. Deeply value the contribution from our close friend UK,” said his tweet.

According to another tweet from the MEA spokesperson on Sunday, emergency medical equipment were received from the Republic of Korea.

“A valued partner in our extended neighborhood. First consignment of 30 oxygen concentrators & 200 oxygen cylinders with regulators arrives from the Republic of Korea. Welcome this support from our Special Strategic Partner,” said the tweet.

Earlier, with an assistance to combat the current crisis amounting to $100 million, the US had rapidly deployed six planeloads of life-saving supplies to New Delhi in six days and mobilized its partners in India to immediately inceease support.

Standing in full solidarity with the Indian people a shipment of urgently needed oxygen, medicine and equipment was delivered by EU Member States European Union as part of its Civil Protection Mechanism.

Meanwhile, Portugal has pledged 5503 vials of Remdesivir, 20,000 litres of oxygen per week. Sweden has offered 120 ventilators.

Furthering its long-standing commitment towards India, Germany is setting up a massive mobile oxygen generation plant which has a capacity to produce 400,000 liters of oxygen per day at the Sardar Patel COVID Hospital, New Delhi.

Earlier, the German Air Force had airlifted 120 PrismaVent 50 ventilators with a special flight to New Delhi on May 1.

Germany has also offered together of 500 ventilators which are due to arrive soon. It is contributing 55,000 Remdesivirs via the European Union Emergency Relief Mechanism (UCPM).

Spain has announced total shipments of 167 respirators and 121 oxygen concentrators and also consumables such as filters and facemasks amounting to 2 million Euros.

The first shipment of the promised supplies from Netherlands including 449 ventilators, 100 oxygen concentrators and other medical supplies arrived in India on Friday.