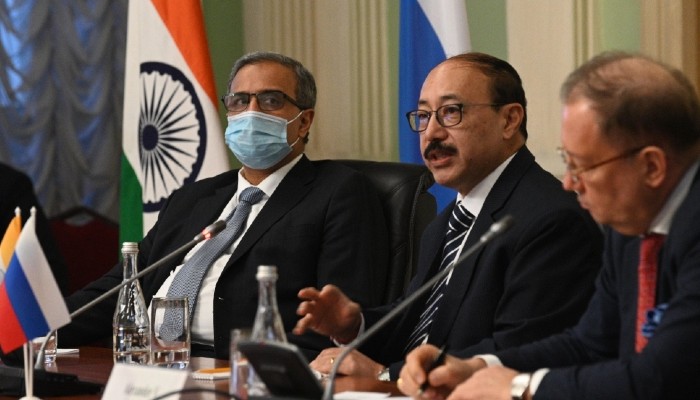 India and Russia have stood together and exhibited tremendous resilience by collaborating in every sector following the Covid-19 pandemic, said Foreign Secretary Harsh Vardhan Shringla during his two-day visit to Moscow.

Addressing the Russian Diplomatic Academy, Moscow, FS Shringla said, “Given the significance we attach to the India-Russia Special and Privileged Strategic Partnership, it is only fitting that Moscow is the destination for my first visit abroad in 2021. I have not travelled much during Covid times, restricted only to essential ones, to only neighbouring countries. This visit is very important from our point of view. It is very critical that we work on maintaining our relations, notwithstanding the impediments of Covid 19.”

Noting that Prime Minister Narendra Modi and President Vladimir Putin have met 19 times since 2014 and this has been maintained even amid the year of the pandemic, FS Shringla said, “This itself shows that importance that we attach to our relationship. The long-term convergence of interests, sensitivity to each other’s core concerns, mutual respect and trust shared by Prime Minister Narendra Modi and President Vladimir Putin and growing people-to-people contacts are key drivers of our bilateral partnership. Defence, energy, space and civil nuclear cooperation have been its traditional pillars.”

“Our two countries have exhibited tremendous resilience following the Covid-19 outbreak. The pandemic has taught us that such challenges can be addressed only through common efforts and of course India and Russia are already cooperating in this direction on not only technical issues but also collaboration is also in the area of vaccines. The Sputnik V is currently undergoing tests in India. It has three testing levels and I think the authorisation is at the earliest possible stage after which we will jointly manufacture this vaccine and distribute it in different parts of the world. ” he added.

In terms of security and defence ties, India and Russia have strong military and military-technical cooperation, he said.

“If we speak of military cooperation, even though we had Covid restrictions we had on 24 June 2020, a 75-member Indian contingent took part in the military parade in Moscow to mark the very important 75th anniversary of victory in World War-II,” Shringla said.

Further, in terms of joint manufacturing, Shringla said, “one of main areas is technical collaboration, we have seen Russian steel in India, production of high quality lamps for use by municipalities and we see a lot of interest in railways, in the waterways sector.”

“The two countries are cooperating in manufacture of the "BrahMos” missile system and licensed production in India of SU-30 aircraft and T-90 tanks are standout examples of our cooperation with Russia. In our January 26 parade this year, a lot of exhibits were Russian made. That is the measure of cooperation that we have in defence sector. We also plan to begin the manufacturing of AK-20 rifles, through an India-Russia joint venture in India, involving full technology transfer,” he added.

Trade can be strong pillar of India-Russia ties

Speaking about the growing trade between India and Russia, FS Shringla said, “India-Russia trade, amounting to US$ 10.11 bn in FY 2019-2020, is far below the potential. Last year there was a slump but we are finding ways of reviving it. Both countries have set the bilateral trade target at US$ 30 billion by 2025. One of the steps taken to enhance trade is the commencement of negotiations in August 2020 for the India-EAEU Free Trade Agreement. The operationalisation of a "Green Corridor” and a Bilateral Investment Protection Arrangement are likely to encourage bilateral trade and investment, respectively. Use of national currencies in bilateral trade settlements will also reduce cost and time as well as risk of held-up payments.”

Noting that the oil and gas sector has been a flagship sector of the commercial cooperation between both sides, he said, “We have been looking out for ways how we can diversify our economic exchanges going beyond the traditional areas and this is one of the important sectors is development of the Russian Far East. Our PM had visited Far East in 2019 and had announced 1 billion dollar credit line and it is one of the main areas of our cooperation. India is looking at investment in new areas such as coking coal, timber, LNG, there is a huge potential there. We have already started a shipping line between Vladivostok and Chennai, is the Eastern sea board of India. We are looking at a significant trade route which was never there, a new route between our two countries.

Further, FS Shringla said, “Indian companies have significantly invested in Russia. India’s investment in the Sakhalin-1 project was one of our earliest public sector investments abroad. Till date, Indian oil and gas companies have acquired stakes in 5 Russian companies/projects at a value of about US$ 15 bn. Rosneft was the leader of a consortium of investors that, in 2017, acquired a 98% stake in India’s Essar Oil at a cost of US$ 12.9 bn.”

“We are seriously into process of privatizing many of our oil majors and some are having very serious discussions with Russian companies to see if some of these stakes can be acquired by Russian companies. We are looking at long-term arrangements for the supply of coking coal from Russia for Indian steel plants. An "India Energy Centre” will be opened in Moscow next month,” he added.

“Our companies are actively exploring investments in Russia in energy, minerals, infrastructure and healthcare. As diplomats we should not be looking at what is traditional but try to do which is new, which adds momentum to the relationship,” he added.

Crucial partners in the Indo-Pacific Region

Further, the foreign secretary said that India and Russia are crucial partners in maintaining peace in the Indo-Pacific region. He said, “Indo-Pacific signifies the seamless interface of the Indian and Pacific Oceans. For India, it is the vast maritime space stretching from the western coast of North America to the eastern shores of Africa. We see this as a free, open, inclusive region, which embraces us all in a common pursuit of progress and prosperity. We would like to work closely with Russia under ASEAN and East Asia Summit, of which both are members. Over 50% of global trade traverses this maritime domain. It is also home to over 60% of the world’s population and the global GDP and hence the security, stability, peace and prosperity of Indo-Pacific region is vital for the world.

“As India takes on the chairmanship of BRICS and RIC this year, we look forward to fruitful cooperation with Russia,” Shringla said.

“We are thankful for Russia’s strong support to India’s candidature for a permanent seat in a reformed United Nations Security Council. This year, India joined the UN Security Council as a non-permanent member for the 8th time. We would like to thank Russia for its support to India’s election. we have been working in the UNSC in close coordination with Russia,” he added.

Maintaining that India and Russia are together in intensive counter-terrorism cooperation in bilateral and multilateral formats, FS Shringla said, “We strongly believe that there can be no justification whatsoever for any acts of terrorism, whether based upon ideological, religious, political, racial, ethnic or any other reasons. We are convinced that the unprecedented spread of this threat requires decisive collective response on part of the entire global community, without double standards and selectivity, in accordance with international law and the UN Charter.”

Speaking about the people-to-people contacts between our two countries, FS Shringla said, “The strong political will to have closer relations is equally matched by a strong public sentiment in both countries. More than 15,000 Indian students are enrolled in various technical institutions in Russia, particularly for the study of medicine. Different aspects of Indian culture, including yoga, Ayurveda, Indian cuisine, dance forms, cinema etc., continue to remain popular in Russia.”

“The philosophical traditions of India and Russia have impacted each other for centuries. The exchange of letters between Mahatma Gandhi and Leo Tolstoy on non-violence, truth and the human spirit continue to inspire us even today and are a subject of academic discourse in both countries. In line with our emphasis on greater engagement with Russia, we intend to have an agreement on the exchange of 5 diplomats per year between India and Russia for short-term training courses. We also intend to step up our cooperation through Buddhist centres of learning and philosophy,” he added.