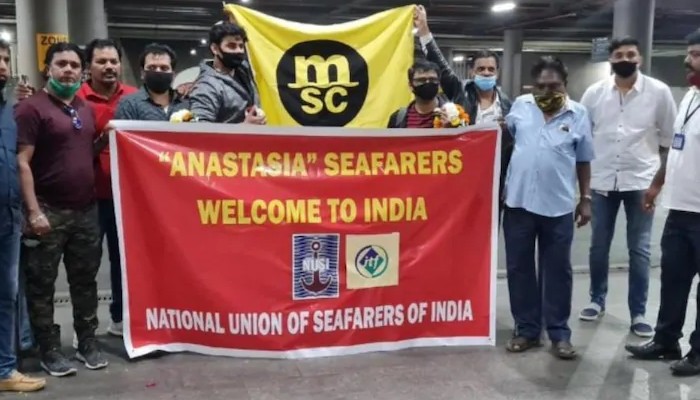 Indian sailors of cargo vessel, MV Anastasia, stranded off a Chinese port for six months, have reached India on February 14. MV Anastasia, a Swiss-Italian cargo ship with 16 seafarers, has been in anchorage near Caofeidian Port in China since September 20.

Last month, crew members of cargo vessel M V Jag Anand had reached India via Japan. They were stranded as China had denied them permission to offload the vessel’s cargo, which was full with Australian coal. Reason cited for the denial of permission by Chinese authorities was an ongoing trade dispute between Australia and China.

General Secretary of the National Union of Seafarers of India (NUSI), Abdulgani Y Serang has termed the return as a result of coordinated efforts by the shipping companies Great Eastern and MSC, maritime administration, Union Ministries of External Affairs and Shipping.

Maritime Union of India together with NUSI had pursued the issue of MV Jag Anand and MV Anastasia which were stranded in the Chinese waters for months.

Of the 16 crew members of MV Anastasia, three are from Mumbai and one from Pune. Among the seamen, a few are also set to leave for Kochi.

Last Wednesday, Union Minister for Shipping Mansukh Mandaviya had announced that the 16 Indian crew members of MV Anastasia will return on February 14.

The Union Shipping Minister’s announcement last week came following the confirmation from the Ministry of External Affairs on February 4 that after continuous follow up by the Indian embassy in Beijing, China has conveyed its clearance on the transfer of the crew of cargo ship, MV Anastasia.

Then India had also said that the Chinese side had conveyed that the shipping company can apply for crew rotation from a different port and that the local authorities would examine the feasibility of such a request.