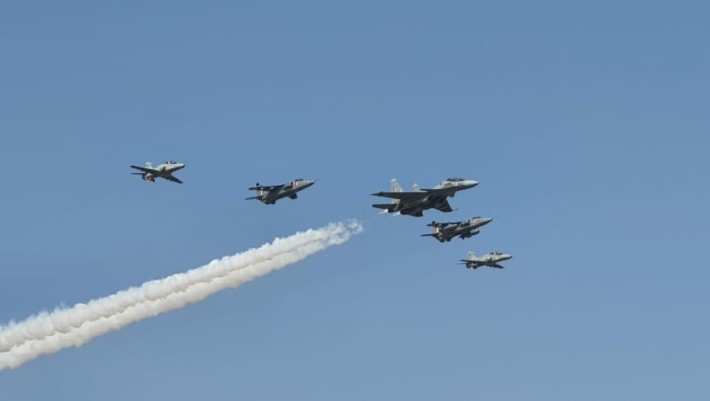 A flight display on the opening day of Aero India 2201.

As India’s premier aerospace and defense exhibition Aero India 2021 began on Wednesday in Bengaluru, Prime Minister Narendra Modi took to Twitter to hail the event as a "wonderful platform for collaborations".

"India offers unlimited potential in defense and aerospace. Aero India is a wonderful platform for collaborations in these areas. The Government of India has brought futuristic reforms in these sectors, which will add impetus to our quest to become Aatmanirbhar," PM Modi wrote on Twitter.

The 13th edition of Aero India began amidst the COVID-19 pandemic pushing for "AatmaNirbhar Bharat Abhiyaan" and "Make in India" programs.

Speaking at the event, Singh said that India plans to spend 130 billion dollars on military modernization in the next 7-8 years.

“We have taken steps to strengthen our security apparatus. Domestic manufacturing of bigger and complex defense platforms has now become the focus of our policy under 'Atmanirbhar Bharat Abhiyan',” the defense minister said.

"To achieve the twin goals of self-reliance and exports, we have set a target to achieve a turnover of Rs 1,75,000 crore, including export of Rs. 35,000 crore in Aerospace and Defence goods and services by the year 2024," Singh said.

“The Aero India 21 will display the vast potential of India, and the multifarious opportunities that our country offers in the field of defense and aerospace sector. It also promises to be the World’s first-ever hybrid Aero and Defence exhibition,” Singh said.

The defense minister asserted that the government's vision is to make India one of the biggest countries in the world in the defense sector, from design to production, with the active participation of the public and private sectors.

"A high-level committee has been constituted, which would authorize exports of major indigenous platforms to various countries, leading to faster approvals for their export," Singh announced.

He expressed happiness over Hindustan Aeronautics Limited (HAL) getting the go-ahead from the Indian Air Force (IAF) for producing Tejas MK1A aircraft.

"I am very happy that HAL has got the orders for the development of 83 new indigenous Light Combat Aircraft (LCA) – Tejas MK1A from IAF valued at more than Rs 48000 crore, it is probably the biggest “Make in India” Defence contract till date," Singh said.

With the growing need for nations to join hands in maintaining peace and harmony the world over, the Air Chiefs Conclave being held alongside Aero India 2021 will provide the much-needed platform to discuss issues related to military aviation, space operations, and aerospace strategy apart from giving them opportunities to learn about each-others' best practices.

According to the Ministry of Defence, the Conclave will also be a perfect example of India's Defence Cooperation with other countries working as a diplomatic instrument, allowing building bridges of friendship, mutual trust, and capacities on a global basis. Promoting transparency in defense cooperation and building areas of common interests in military aviation will be focus areas of the CAS Conclave.

As many as 601 exhibitors, including 523 Indian and 78 foreign, and 14 countries are participating in the event. Companies will display their capabilities, latest technologies, solutions, products, and services at the show.

Defense Research and Development Organisation (DRDO) is showcasing its latest defense technologies and demonstrating many systems. Other key attractions will be flight displays by 'Surya Kiran' aircraft and 'Sarang' helicopters.