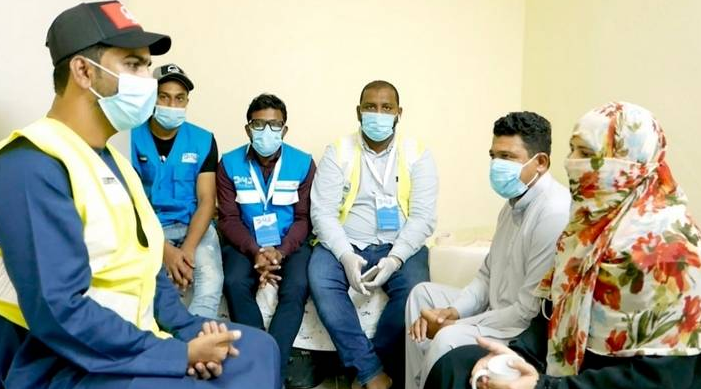 A group of Indian volunteers proved to be guardian angels for Pakistani expat Tehmeena, who went through a miscarriage while her husband was stranded abroad

A team of Kerala Muslim Cultural Centre (KMCC) volunteers offered Tehmeena, who is from the Punjab province of Pakistan, financial and moral support in the absence of her husband, who works as a truck driver and got stranded in Oman after the borders closed as a precautionary measure to curb the spread of Covid-19.

"They were of great help in my troubled times and I won't forget it in my whole life," Tehmeena told Khaleej Times.

Her husband Khawar Ashraf is now back and said he will remain grateful forever for the volunteers' humanitarian gesture.

"Doctors had recommended dilation and curettage (D&C) for her. We were struggling financially and needed help. I was in Oman when she developed complications. In such a situation, volunteers from our neighbouring country, Shabeer and his team, came to our help," he said.

Tehmeena arrived in the UAE four months back on a visit visa. As she had a history of miscarriage, the couple was worried about the child and went to a hospital. Because of the Covid-19 situation only emergency cases were being attended to at the hospital and they had to return.

However, on the last day of Ramadan, she developed pain and was seeking help when she got the number of KMCC volunteers from social media.

"She contacted Shabeer and sought help. They rushed to our place in Sharjah and treated my wife as their own sister. They took her to hospital and convinced them about the situation. The KMCC team helped her at every step to complete the whole process. They even provided her with food. May Allah bless the entire team of volunteers," said Ashraf.

Led by Shabeer Kizhur, the volunteers who are all part of the Day for Dubai programme, supported Tehmeena. They also paid the hospital bill and even signed consent forms on Ashraf's behalf.

"We were ending the fast on the last day of the holy month of Ramadan when we received the call. We asked her to wait for an hour, but managed to reach her home in Sharjah even before that and shifted her to the hospital. Though the hospital was reluctant to take the case initially, after a bit of coaxing, they agreed to admit her. The expenses for her treatment were met from the charity fund of the KMCC," said Shabeer.

All necessary treatment was done and gradually she regained her health. She was soon discharged and returned to her home.

"It is sad that the baby was not alive. But at least she is fine now," said Shabeer.

Such gestures not only bridge communities but also strengthen social bonds. Humanitarianism has no frontiers and it is the work of these volunteers that deserves to be celebrated as the world fights the global pandemic.