How Modi is strengthening grassroots democracy in Kashmir 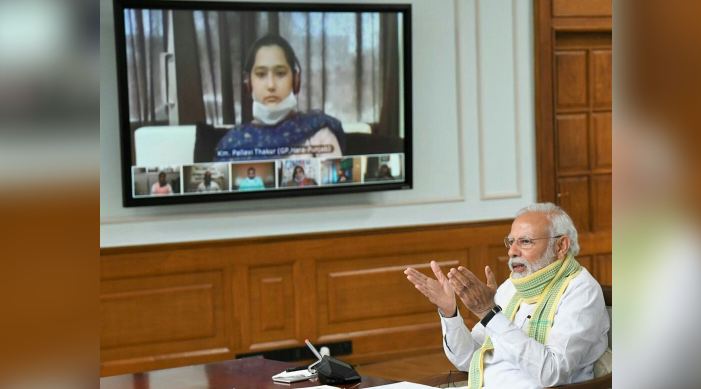 On April 24, Indian Prime Minister Narendra Modi held a video conference with sarpanches (village-level decision makers) of the country to commemorate the Panchayati Raj Day. The Prime Minister sought first-hand information from them regarding their contribution in fighting Covid-19 followed by suggestions for the future course of action.

PM Modi’s gesture of seeking views from the grassroot leaders yet again reminds of India’s faith in its federal democratic structure. Ever since the Modi-led BJP government came into power in Delhi, it has been working to devolve powers from the civil secretariat to grass root leaders through Panchayati Raj Institutions.

Jammu and Kashmir had no such institution in place until recently. Despite having elections democratically like in other parts of the country for Assembly and Parliamentary seats, for many decades, it had no elections for Panchayati Raj Institutions (PRI) and Urban Local Bodies (ULBs). The last Panchayati Raj elections held in 2011 under the Omar Abdullah government were unfortunately marred by separatist violence.

Over 70 Panches and Sarpanches were killed by terrorists, threatening to undermine the democratic process in the region. The separatists’ violence, however, was not the only threat the Omar Abdullah-led government was facing. The more critical to the process was his own government. In the National Conference and Congress coalition government, the legislators had warned Omar Abdullah against any decentralisation of powers. It is worth mentioning here that the intelligence and security agencies had attributed many killings during the 2011 Panchayat elections to political vendetta.

Nevertheless, Omar Abdullah succeeded in completing the first round of elections with substantial 75 per cent public participation. When it was time to hold the second phase of elections for the Block Development Council (BDC), Omar Abdullah took a U-turn following massive pressure from his legislators. All the legislators in his government built pressure and warned him against strengthening the Panchayati Raj institutions. When the media asked Omar Abdullah for his failure in holding the BDC polls, he candidly admitted it to the media. Even former Union Home secretary G. K. Pillai revealed it in an interview to IANS on September 8, 2016.

"Omar said that he would try. But he got back to the Centre stating that there were hurdles as the MLAs were not allowing this to happen. If I take a sanguine stand, my chair will be at risk, Omar had then informed the central government," Pillai said in the interview.

On the other hand, the centre repeatedly asked the Omar Abdullah government to introduce the 73rd amendment of Panchayati Raj Act (PRA) in the state in order to receive the financial grants to the Panchayat bodies for local development. Instead of making way for implementing the amendments, his government not only ignored these directions, but also left no chance in politicising the issue. Systematic campaigns were launched ostensibly in provoking people against New Delhi that it wants to snatch away the political autonomy of the region granted under Article 370. The mischievous attempts were made despite the fact that incorporation of 73rd Amendment to the PRA was guaranteeing more autonomy and prosperity to the region and disempowering the elite class.

It is worth mentioning here that Article 370 of the Indian Constitution which gave sweeping political powers to the local Legislative Assembly also had limited the intervention of the Centre into the affairs of Jammu and Kashmir. In fact, the law had become a tool for blackmailing New Delhi and exploiting locals by the elite political dynasties and bureaucrats of Kashmir.

Any central law, before being implemented in Jammu and Kashmir, was necessarily to pass through the local legislation. Many of those central laws empowering common people had never seen the light of the day while laws that would ensure free flow of funds and bring more powers to the legislatures were passed easily. The 73rd Amendment, POCSO, Right to Education (RTE) and many other laws were not implemented as they were directly empowering the common masses. While on the other hand, the acts that would bring in centrally-sponsored flagship programmes to Jammu and Kashmir with huge flow of money like SSA, NHM, MNREGA and many others were extended to Jammu and Kashmir on a priority basis.

Meanwhile, with over 33,000 Panches and Sarpanches being elected by massive participation of people in the electoral process, all of them had felt cheated and dejected. They were not politically empowered. All they were asked was to monitor the attendance of teachers in schools, doctors in hospitals and employees in other government offices. The astonished chairman of JKPC Shafiq Mir once forcefully said that the government has given them a role of none other than an informer.

“When we rejected the separatist boycott call and believed in strengthening the democratic institution, we were treated no more than the informers of government. This treatment we have got despite walking over the dead bodies of our own people to complete the journey for democracy,” Mir said once during a protest rally at Srinagar.

Mir and his colleagues’ long fight for several years to seek the empowerment of institutions could yield little or no fruits. Owing to political insensitivity by the political regimes in the erstwhile state, it widened the gap and trust deficit between the people and state.

The year 2014 was the watershed movement for India and especially for Jammu and Kashmir. BJP’s thumping victory in the Parliamentary polls was a direct consent for Modi to change the decades-old status quo in the country. Modi vowed to build a “naya” (new) Kashmir and decimate the dynastic rule that over the years had bred separatism and despondency in the region. His march to Kashmir began after shaking hands with the regional People’s Democratic Party (PDP) and forming the government.

PDP is known to be the soft face of separatism in Kashmir. But Modi reined in Mehbooba Mufti from favoring separatism in Kashmir. When Modi realized Mehbooba was failing and continued to have a soft corner for the people with a separatist mindset, the BJP pulled the rug from under her feet. Governor’s Rule was imposed. The then Governor Satya Pal Malik-led State Administrative Council approved an amendment to Jammu and Kashmir Panchayati Raj Act, 1989 to hold direct elections for Sarpanches.

Earlier in 2016, the Mehbooba-led government had amended the Panchayati Raj act of JK to have indirect elections for Sarpanches through panches of the local Panchayat. The move was believed to have opened the gates for horse trading and unnecessary political intervention in the Panchayati Raj institutions. Modi prevented Mehbooba in her efforts of weakening the democratic structure of Jammu and Kashmir. Subsequently, the tool of blackmailing –Article 370 got scrapped

The role of the National Investigation Agency (NIA) and other investigating agencies was extended to ensure accountability in the system. While many of the top politicians under corruption charges have been put behind the bars, on the other hand the much-awaited Panchayat elections were held with no incidents of violence.

Following the successful completion of the Panchayati elections, elections for the Block Development Council (BDC) were held for the first time. One of the BDC Chairpersons, Mir Iqbal for Narva zone in north Kashmir, was chosen among the sarpanchs from across the country to interact with Prime Minister Narendra Modi on April 24. Mir belongs to Congress and is one among the new breed of political leadership emerging in Kashmir after the Panchayat elections were held in Jammu and Kashmir.

Now, the Jammu and Kashmir administration is bracing up for a more meaningful exercise of holding District Development Board (DDB) elections. Once the elections are held for the DDB, the district collectors have to serve as Personal secretary to the Chairman. As of now, it is the bureaucracy that rules the roost, not the public representatives.

Ahead of those elections, the administration has already advertised hundreds of clerical posts for the Panchayats to set up full scale administrative offices.

Modi’s dream of building a peaceful and progressive Kashmir seems unflinching though some designs are hell bent to see him failing. It is evident from the opposition and criticism he receives from the opponents of these moves.

The writer is a Kashmir-based research scholar

This will ensure sustainable growth, increased income and fresh avenues of livelihood for farmers