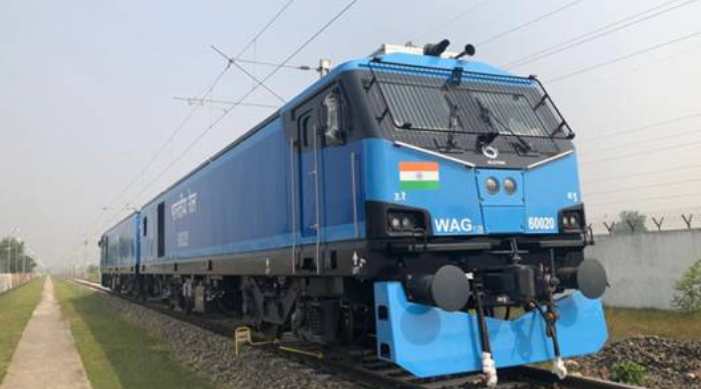 For the first time, a high horsepower locomotive has been operationalised on a broad gauge track in the world

Make in India initiative has begun to roll from an electric loco factory based at Madhepura, a remote town lying almost 300 km away from Bihar’s capital Patna.

The Madhepura factory is the largest integrated Green Field facility built to the highest standards of quality and safety with production capacity of 120 locomotives and spread across a massive 250 acres.

As per the statement issued by the Ministry of Railways, this locomotive is state of art IGBT based, 3 phase drive, 9000 KW (12000 horsepower) electric engine and is capable of maximum tractive effort of 706 kN, which is capable of starting and running a 6000 T train in the gradient of 1 in 150. The locomotive with twin Bo-Bo design having 22.5 T (Tonnes) axle load is upgradable to 25 Tonnes with design speed of 120 kmph.

This locomotive will be a game changer for further movement of coal trains for dedicated freight corridors. The locomotives can be tracked through GPS for its strategic use through embedded software and antennae being lifted through the servers on ground through microwave link.

The locomotive is capable of working on railway tracks with conventional OHE lines as well as on Dedicated Freight corridors with high rise OHE lines. The locomotive has air-conditioned driver cabs on either side and is equipped with a regenerative braking system which provides substantial energy savings during operations. As per the statement, the high horsepower locomotives will help to decongest the saturated tracks by improving average speed of freight trains.

Madhepura Electric Locomotive Pvt. Ltd. (MELPL) will manufacture 800 State of the Art 12000 HP Electric Freight Locomotives in 11 years and being one of the most powerful electric locomotive in the world will increase the speed of freight trains and will allow faster, safer and heavier freight trains to move across the country, thus reducing congestion in traffic.

It will also lead to considerable savings in energy consumption through regenerative braking. As part of the project, a factory along with township has been set up in Madhepura, Bihar with capacity to manufacture 120 locomotives per year.

The project will create more than 10,000 direct and indirect jobs in the country. More than Rs 2000 Crores has already been invested in the project by the company.

Along with the factory, socio-economic development in Madhepura is being driven by this project. As part of CSR initiative skill centres are being set up in Madhepura to impart training to local people.

‘Need to institutionalize best practices learnt during last one and half years’: PM Modi to vaccine manufacturers

The entire world is looking up to India, in the backdrop of the success of the vaccination drive

‘Our health workers, through their tireless efforts and resolve, set a new example…they established a new benchmark in service to humanity,’ the PM said