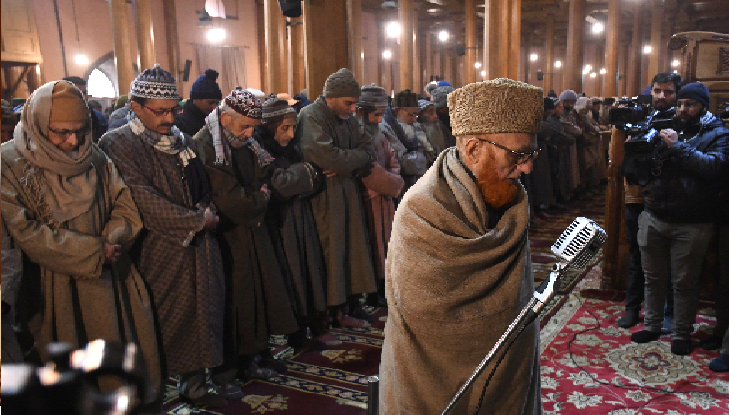 Jamia Masjid or the Grand Mosque is one of the biggest mosques in Kashmir. The management said that Friday prayers will now be regularly held.

The historic Jamia Masjid hosted Friday prayers on December 20, and hundreds of people from various parts of the city turned up to attend. Hurriyat chairman Mirwaiz Umar Farooq, who has been under house arrest since August 5, was not allowed to pray at the mosque.

Jamia Masjid or the Grand Mosque is one of the biggest mosques in Kashmir. Before August 5, the current Mirwaiz, also the head of the separatist group Hurriyat used to deliver weekly sermons from the pulpit of the mosque. Strict restrictions on movement and communication were imposed across Kashmir on August 5; on August 5 and 6, parliament passed laws and resolutions bifurcating the erstwhile state of Jammu & Kashmir into two union territories, and scrapping constitutional provisions that gave the region special status and its residents special privileges.

On Friday, police and CRPF men in combat gear were deployed along routes to the mosque, although there was little evidence of them in the main square. Senior police officials in three bullet proof vehicles kept a close watch on the people entering. Some shopkeepers downed shutters to observe prayers inside the mosque. After 19 weeks, the mosque’s public address system reverberated with the calls for prayer.

“After 19 Fridays we are offering prayers in the historic mosque,’’ said Abdul Majid, a shopkeeper in the courtyard of mosque.

Jan Mohammad of Nowhatta said whenever something happens in Kashmir, Jamia Masjid is closed for prayers. “I am happy that I am again able to hear the call for prayers from the mosque now. The government shouldn’t close our mosques, especially Jamia Masjid.’’

At the mosque’s entrance, four volunteers wearing pherans (long Kashmiri tunics) were frisking people thoroughly before allowing them inside. “Instead of Mirwaiz, the head priest will be delivering the Friday sermon,’’ said one of the volunteers.

On Dec 18, for the first time after 135 days, prayers were held in the grand mosque.

On Dec 17, Anjuman-e-Auqaf, the body managing the mosque held a meeting after security forces were removed from the gates and decided to restart prayers. The management said on Friday that prayers, especially Friday ones, will now be regular.

Local police officers claim that they removed restrictions around the Jamia Masjid on November 22 itself, but that people (and the management of the mosque) refused to hold prayers till the security forces deployed around the mosque were removed.

The cold weather and the fact that the mosque was hosting Friday prayers after 19 weeks meant that only a few hundred people, including many women, turned up.